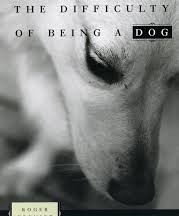 The Difficulty of Being a Dog by Roger Grenier (translated Alice Kaplan). An upmarket jumble sale of a book, mostly about dogs. This review first appeared in Nudge Books (now NB).

The difficulty of reviewing this book: there is some. Just what is it, exactly? Who and what is it for? It’s mostly about dogs, but isn’t really a dog book. It’s something of an anthology and something of a memoir, but you wouldn’t call it either. There’s some philosophy and opinion, but the author doesn’t have a point to make. He’s what the novelist Robertson Davies called ‘an advocate of ornamental knowledge’:

You like the mind to be a neat machine, equipped to work efficiently, if narrowly, and with no extra bits or useless parts. I like the mind to be a dustbin of scraps of brilliant fabric, odd gems, worthless but fascinating curiosities, tinsel, quaint bits of carving, and a reasonable amount of healthy dirt.

Grenier writes what he knows, which is a lot. He was born in 1919, participated in the liberation of Paris in 1944, and has been a writer and publisher more or less since. Many of the big names of postwar French literature were friends or acquaintances. If he drops them into his stories, it comes naturally. He is also very widely read and has a cool, very French intellectual self-confidence; he doesn’t worry much about being highbrow. A nicely self-knowing sense of humour takes some of the edge off this—here he describes interviewing an actor while working as a journalist:

We sat a good half hour face-to-face without speaking. My method was to say nothing, because people usually can’t tolerate silence. So they start to confess. But with him it didn’t work. In the end we burst out laughing.

There are forty-three short chapters, only loosely connected; each can stand alone. Some are very short, while the longest are no more than a few pages. In them the author tells stories, shares bits of reading and experience, occasionally offers opinions, turns over some ideas. The question I kept asking myself was, is this painfully, unbearably literary, or am I really enjoying it?

There’s too much ‘Baudelaire said … Camus did … Sartre thought … Shakespeare wrote’. At times it’s relentlessly, pitilessly cultured. But then there are all the bits and pieces full of unlikely interest. Take this:

In Russia and its satellites, in the days of communism, the companion dog had a bad reputation; it was seen as a superfluous consumer and as a sign of individualism, selfish introversion. Having a dog was like turning one’s back on the collective. […] When they nationalized business, they forgot about the trade in dogs, which consequently began to proliferate. The state’s response to this black market was to unleash repressive measures against the canine race. […] I was walking mine in the streets of Prague when a young man cried out, ‘Long live the dogs!’ Old people came up to me and explained, in the French they had once learned, that life in the old days was happier for dogs. It was their way of saying what they thought. Dogs were not allowed in restaurants. Still, one night, they let us in. And, even though there wasn’t much to eat, the head waiter brought a plate of meat for Ulysses [the author’s dog] and set it conspicuously on the ground, right in the middle of the restaurant.

We’re told about the London tradition of kidnapping dogs for ransom, with its well-established etiquette and conventions; F Scott Fitzgerald’s drinking song in praise of dogs; Aristotle’s minute observations on dogs’ peeing: bits and pieces that you wouldn’t actively seek out but are glad to have put before you.

There’s also an oblique insight into the French, through their relationship with dogs.

The French, perhaps even more than others, talk to their dogs and cats as if they were human. And they are totally surprised whenever their pet exhibits a sudden return to animality. When, for example, rediscovering its ancient instinct to camouflage itself for hunting, a dog rolls in shit. How could our favourite conversation partner—one whose wit, wisdom and even (why not?) philosophy we so admire—go so far astray?

The French also sometimes call dogs bêtes de chagrin, ‘beasts of sorrow’, because they ‘inflict the sorrow of loss upon us’. They have (to us) restrictive naming conventions, where each year has a letter assigned to it, and all dog names should begin with that. So, in 2013 it was ‘I’ and this year it is ‘J’. You can tell how old a dog is, much like we in the UK can tell a car’s age from its number plate.

All of this comes together as the author’s diffuse, inconclusive response to the questions asked at the beginning the book:

How can such an understanding exist between two species? […] At the same time, what could be easier? You come across a dog. A word, a caress, and it responds with no further ado. It is the mystery of these exchanges that led me to write this book. But I know it will resolve nothing and that dogs will never cease to amaze me.

That’s why the book was written, and it’s for anyone who thinks that’s interesting, however obliquely. I wasn’t always interested, was sometimes irritated or nonplussed, but it also gave me a lot of quiet enjoyment and there were a few unexpected things that I won’t forget.

Emmanuel Levinas, captured by the Germans in 1940 and sent to a forest work detail with other Jewish prisoners of war, realised that in the eyes of his guards, and even of passersby, he and his fellow prisoners no longer belonged to the human race. Then a stray dog came and joined them: ‘For the dog, there was no doubt we were men.’