Here’s some more vexatious, misunderstood and underused words and phrases.

Snuff out that snipe

Side note: it’s said that the last words of H H Munro (‘Saki’), one of Ewardian Britain’s greatest wits, were ‘Put that bloody cigarette out!’ He was killed by a German sniper on the Western Front in 1916, just shy of his forty-sixth birthday.

I left a note for myself when I added this to the list of future entries last year—Tory leadership election. I’d change this to political party leadership elections for greater fairness and topicality if the current one didn’t have another two months to run. Spoken with whatever gentle approximation of a French accent you feel most comfortable with.

Zoonosis (noun): ‘A disease which can be transmitted to humans from animals.’ (OED)

Zoonotic (adjective): ‘of or relating to zoonosis’. (Collins)

‘The 2019-nCoV outbreak is another reminder that people should limit the consumption of wild animals to prevent zoonotic infections.’ (The Conversation)

‘The smell of beeswax and chrysanthemums, later to be permeated by incense, was heavy on the brumous air.’ (Evelyn Waugh, Unconditional Surrender)

Collins: ‘(esp of the wind) to make a characteristic sighing sound’; ‘a soft continuous murmuring sound’.

‘But Don Gaetano, Father Pirrone’s father, had managed to avoid this occupational disease by rigorous hygiene based on discretion and a careful use of preventive remedies; and he had died peacefully of pneumonia one bright Sunday in February when a soughing wind was stripping the almond blossom.’ (Tomasi di Lampedusa (tr. Archibald Colquhoun), The Leopard)

Accidie is a manifestation of one of the Seven Deadly Sins, sloth. It doesn’t mean a state of ease or enjoyable idleness, but apathetic torpor or a sort of restless distraction. It’s not so much (or only) about avoiding doing things you don’t want to do, but also avoiding doing things you do want to do, or want to want to do, or must do, or are meant to do in the sense of having a purpose in life, divine or otherwise. It’s a form of self-thwarting and even self-destruction.

‘The malice of Sloth lies not merely in the neglect of duty (though that can be a symptom of it) but in the refusal of joy. It is allied to despair.’ (Evelyn Waugh, ‘Sloth’, The Seven Deadly Sins)

Also known as the destruction that wasteth at noonday, the noonday devil, the noonday demon, the demon of noontide, the midday demon or the meridian demon (from variant translations of Psalm 91 : 6) because it was thought to be an especial peril at noon. (cf. Tennyson’s Lotos-Eaters, ‘In the afternoon they came unto a land/In which it seemed always afternoon./All round the coast the languid air did swoon,/Breathing like one that hath a weary dream…’.)

‘The meridian demon was upon him; he was possessed by that bored and hopeless post-prandial melancholy which the cenobites of old knew and feared under the name of ‘”accidie”.’ (Aldous Huxley, Chrome Yellow)

‘A member of a monastic community’ (OED); ‘a member of a religious order following a communal rule of life’ (Collins).

‘A frivolous or foolish person’; ‘A thing of no great importance’. (OED; noun; also fribbler)

‘To fritter away; waste’; ‘to act frivolously; trifle’. (Collins; verb)

‘I fribbled away the hours whistling and scrolling through my Twitter feed.’

‘Well, ma’am, you’ll be pleased to remember ’tis you orders me, in case
Master Charles should turn on me about it; but, as you say, ma’am,
there’s many thinks ’tis all nothin’ but old ‘oman’s tales and
fribble-frabble; and ’tisn’t for me to say—’ (Sheridan le Fanu, The Wyvern Mystery)

Now thought to be the seat of racism. Almost always seen in the negative, i.e. ‘X doesn’t have a racist bone in his body’ rather than ‘Every bone of X‘s body is riddled with racism.’

Ferment (verb): to undergo fermentation. Fermentation is the chemical process in which organic matter becomes alcohol.

Ferment (noun): ‘Agitation and excitement among a group of people, typically concerning major change and leading to trouble or violence.’ (OED)

Foment (verb): ‘Instigate or stir up (an undesirable or violent sentiment or course of action).’ (OED)

‘Asked about his entry in the Who’s Who directory of influential people which lists his passion for “generally fermenting the overthrow of capitalism”, McDonnell said it was a joke about beer-making, but he agrees with the principle.’ (Reuters)

‘Elites denounce the “populists” while denying that they have fomented a class war.’ (First Things)

A friendly all-purpose insult of undefined meaning. Its use may be related to its other slang meanings: ‘an act of sexual intercouse’ (see here and here) and ‘genitals’ (unverified). If you have other ideas, let me know. 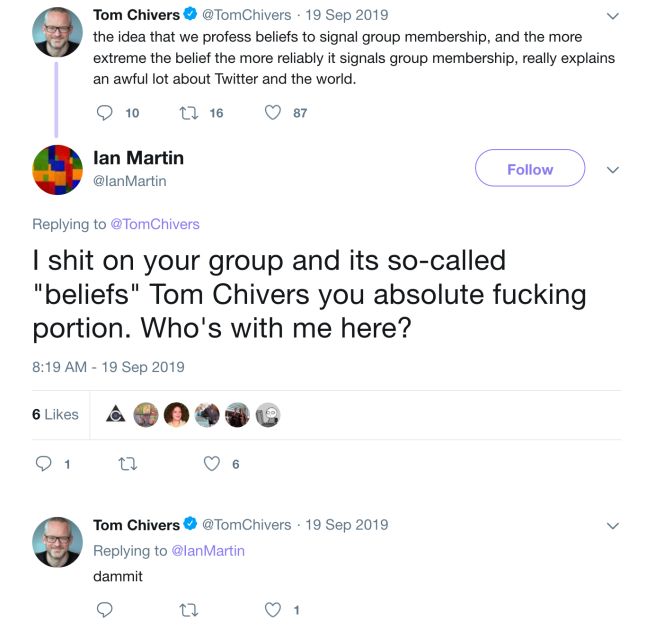 Traditionally, to refute something (a statement, proposition, etc) is to disprove it, to demonstrate that it is incorrect, but its meaning has been expanded, or, if you prefer, corrupted to also mean denial without proof.

Presumably because politicians and other habitually guilty parties considered it to be more emphatic, more credible, than ‘deny’, they began to say that they refuted allegations utterly. If it ever worked it doesn’t now and just makes them wrong in an additional way.

‘I utterly refute the suggestion that the late Mr Terence Baker committed or was asked to commit perjury on my behalf.’ (Baron Archer of Weston-super-Mare, aka Jeffrey Archer, quoted in The Independent; Archer was later charged with perjury and convicted)

‘After we came out of the church, we stood talking for some time together of Bishop Berkeley’s ingenious sophistry to prove the nonexistence of matter, and that every thing in the universe is merely ideal. I observed, that though we are satisfied his doctrine is not true, it is impossible to refute it. I never shall forget the alacrity with which Johnson answered, striking his foot with mighty force against a large stone, till he rebounded from it—“I refute it thus.”’ (James Boswell, Life of Johnson)

‘A rumbling or gurgling noise made by the movement of fluid and gas in the intestines.’ (OED)

‘What they eat, for example, and their way of eating it—the noise, the open-mouthed champing, the primitive gestures, the borborygmous, the belching, the roaring jocularity, the—I will spare you many aspects, but I assure that to an educated man, who has no very robust vital principle, who knows nothing of the sea but the Dover packet, who has lived retired, and who has been much reduced by unhappiness, all these things together can bring about a morbid state, an anorexy; and he may literally starve in the midst of plenty.’ (Patrick O’Brian, Desolation Island)