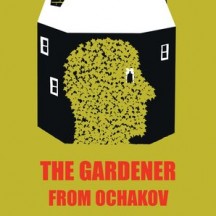 The Gardener from Ochakov by Andrey Kurkov (translated by Amanda Love Darragh). ‘We live in an interesting country, these are interesting times … we can’t help being interesting ourselves’. A Russo-Ukrainian novel. This review first appeared in Nudge Books (now NB).

The first of Kurkov’s novels to be translated into English was Death and the Penguin, in 2001; the Russian-language original, Smert’postoronnego, had been published in Ukraine five years earlier. It was an oblique, unpredictable success. A hard-boiled portrait of post-Soviet Ukraine, with its gangsters and corrupt politicians and its moral and physical uncertainty, could easily have attracted some earnest critical interest, but this was different. It seemed plausible and even matter of fact, offering an insight into its time and place, but with this came a protagonist with a pet penguin and a job straight from a sinister version of G K Chesterton’s Club of Queer Trades, where eccentrically employed members must have invented the means by which they earn their living. This wasn’t just whimsy, it worked. It was wholly convincing and, far from undermining the realism, it complemented and emphasised it. There was also something appealing about it, beyond analysis. It seemed natural, fitting, even essential, and made familiar themes fresh. And then Death and the Penguin was not only melancholy and funny, a common enough if contrasting mix, it was also exciting, with strong thriller elements. Here was something new, something to look for again.

All Kurkov’s translated fiction I’ve read since has followed a familiar pattern. Life is often solitary, sometimes nasty and brutish, and frequently short. Nonetheless, the tone is generally as much amused as oppressed, and there’s rarely a shortage of drink. Each book has a striking set-up or premise, which then leads to more-or-less violent action, with the protagonist being caught up in a ruthless and self-interested world centred on money and politics. And so on. They echo Death and the Penguin, but without ever matching its near perfection.

The Gardener from Ochakov doesn’t stray much from this. It’s perhaps a little gentler than some, less solitary, but not so very much so. The premise requires not so much willing as eager suspension of disbelief; like all the post-Death books (including the to me regrettable sequel, Penguin Lost), the set-up seems more of a conceit than a fresh approach. It’s amusing and workable and leads to an entertaining story, but it isn’t suggestive of some greater truth. Here it’s that by putting on an old Soviet-era policeman’s uniform and drinking spirits, the protagonist can return to 1957 and the Khrushchev-era communist world.

It’s a likeable but limited book, which could have offered more despite the thinness of the premise. Some interesting characters and ideas suggest more than they deliver, and feel undeveloped and incomplete. In particular, I was expecting a little more from the mysterious Book of Food, which was interesting enough to make it more disappointing. The writing is a little trite, but it isn’t clear whether this comes from the original or the translation. I was surprised to see something translated as an ‘added bonus’, a harmless enough solecism, but a notorious one and unexpected from a language professional. Some of the references to modern technology seem forced and not entirely convincing. Notwithstanding, this is a good page-turner, with an amiable narrative voice, and it’s easy to enjoy. You get a strong sense that Kurkov is on the side of the angels; moderate, liberal Anglican angels, rather than the more robust eastern Orthodox sort. The satire is so mild that it draws no blood, even if you feel that something stronger is called for. While I’ve read and re-read Death and the Penguin over the last decade, in ten years I doubt I’ll remember much of The Gardener from Ochakov, but neither will I regret having read it.

As a side note, Kurkov, though a Russian-speaking Ukrainian, has consistently and courageously satirised Vladimir Putin (see The President’s Last Love, in particular) and has latterly been critical of Russian encroachment in Ukraine. He can be followed on Twitter: @AKurkov.