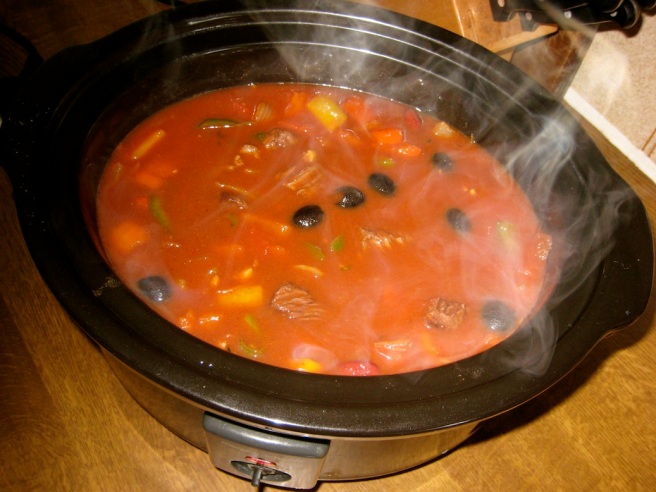 It’s the time of year to say something about the nights drawing in and it being colder, this requiring hearty comfort food and all that. For myself, I like this casserole at any time of year and think it quite suits the summer, but it is hearty. It can be a simple, economical meal, but it’s also good enough to give to old friends with some good wine. This makes at least half-a-dozen big portions, depending on how you eke it out.

I’ll assume you know how to slow-fry onions and garlic, and then peppers, chillies, celery and chorizo: do so. I add the paprika, thyme and (often) a bit of cinnamon stick for the latter part. The chorizo, if used, is spiced with paprika, so exercise some caution if you want to. Braise the salted-and-peppered beef in a hot frying pan separately. If you’re using a slow cooker: deglaze both frying pans with red wine and then add the lot to the pot once the alcohol has burnt off (a minute or so). A glass or so’s worth will do. I often add some brine from the black olives at the same time, for extra liquid and flavour. If you’re using a big stove-top pot: I’m guessing you sautéed the vegetables in it; deglaze the beef pan and add the beef and juices to the big pot. Add the beans. I usually use dried ones I’ve soaked overnight and then cooked shortly before using; if they’re still hot, so much the better as they won’t cool the mix. Add the olives. Squeeze in some lemon, if you like. Add the tomatoes. There should be enough to cover the mix comfortably. Tastes differ, but this isn’t an Italian pasta sauce, so mind yourself. Slow cook for a couple of hours or so (more if beef shin is used) in the pot, or all day if it’s in the slow cooker. I tend to cook this for a long time, though skirt will deteriorate if cooked too long. If you use a leaner cut of beef or something more steak-like, have a care. Note: if I’m using a slow cooker I add the tomatoes at the beginning so it’s heating while all the other work is going on.

I usually serve the first portion with rice or roasted/fried potatoes, flatbread and a green vegetable, probably green beans or mange tout. Some Greek yoghurt on the side is good, especially if you’ve been liberal with the chillies; it’s also nice with fried potatoes. Later I often rework the casserole into enchilada fillings, etc. You can make a huge batch and never eat the same meal twice from it.

Wine: I generally serve this with a Brian Blessed red; big, not obviously troubled by self-doubt, but cultured. The casserole has a blend of flavours, with meat, spice, herbs, and a little sweetness and smokiness, while tomatoes, being both acidic and sweet, can be hard on wine, so something outside the ordinary, not straight up and down, is in order. Below are a few I’ve picked out from my favourite Bristol (Corks) and mail order (Wine Society) merchants.

Beer: a cold lager may be best. Estrella, the Catalonian beer, would keep up the pan-Mediterranean feel, or if you want something with a bit more substance to go with rather than cut through the rich flavours, the almost brown Anchor Steam ale–lager might be even better. Beer writer Andy Hamilton said ‘Enhance the heat with an IPA or go for a pint of bitter.’

Three wines from Corks of Cotham and North Street (Bristol)

Under £10. Tenute Rubino Negromaro 2011. Italy (Salento, in Puglia). These southern Italian wines give you much for their very reasonable prices. Negromaro makes very dark wine, with hints of smokiness and bitterness, making it quite a nice match here. This is a good ‘un. (£9.99 at time of publication.)

Under £20. Ego Monastrell 2009. Spain (Jumilla). Monastrell (Spanish) is better known as Mourvèdre (French). In the Rhone valley it’s blended with Syrah (Shiraz), Grenache and Cinsault to make big and characterful wines, perhaps most famously Châteauneuf-du-Pape, while in Bandol it’s the main grape. It’s probably Spanish in origin, however, and in Jumilla it is used to make increasingly good wine that won’t be trifled with—the French used to call Mourvèdre étrangle–chien, the dog-strangler, because of its intense tannins. This is really good, meeting and matching the beef and all the accompanying flavours. (£15.99 at time of publication.)

Over £20. Les Clos Perdus L’Extreme 2005. France (South—Cotes Catalanes). This is highly individual. It’s 75% Llandoner Pelut and 25% Syrah. What’s Llandoner Pelut? The Catalans call it Garnatxa Peluda, ‘hairy Grenache’. It’s a sort of cousin of the better known grape, with smaller and darker fruit. This is another rich, exotic wine, and it’s worth the money. (£29.99 at time of publication.)

Three Wines from the Wine Society

Under £10. Bricco Rosso Suagnà Langhe Rosso 2009 (Manfredi). Italy (Piedmont). ‘A lovely barrel-aged blend of Dolcetto and Nebbiolo. Ripe, full and mellow, and fantastic value for money.‘ (£7.95 at time of publication.)

Under £20. Coyam 2010 (Emiliana). Chile. ‘A generous brew of Syrah, Carmenère, Merlot, Petit Verdot and Mourvèdre aged in barrel for 13 months. Made from organically grown grapes.’ (£14.95 at time of publication.)

Over £20. Chateau Musar 2007 (Chateau Musar). Lebanon. ‘This famous Cabernet, Cinsault and Carignan wine from Lebanon is particularly exotic in 2007. Lower yields and a summer heatwave resulted in a wine which rests its quality on power, muscle and concentrated dark fruit and spice flavours.’ (£22 at time of publication.)